They arrived through the rifts which caused the first fadings – towering colossi who came from the realm of shadow. They brought with them dusk and war, and where they fell, entire civilizations were built around them.

(This article is a response to Cédric Plante’s Calcified Titan Crater Library post from Feb 20, 2017.)

Almost five hundred years ago, when the keuppia attempted the ritual which should have ended their enslavement to the yuan-ti, instead rifts were opened to the realm of shadow, bringing about the end of an era. From these rifts strode colossi – towering above the tallest trees, and some as tall as small mountains. These beings brought pure shadow with them, destroying cities with their careless strides, and dragging behind them mile-wide shrouds of dusk. Though only a dozen ever came to Ord, their presence was felt by more than any since the first dwarven earthships broke through Ord’s crust over two thousand years ago.

Eventually, the might of the combined peoples of the civilizations of Alsa Eru was able to bring the beings down, and where each fell they left a crater beneath them, and a permanent swath of shadow behind them. As the life drained from the fallen bodies, the flesh calcified, creating gargantuan man-shaped landscapes. 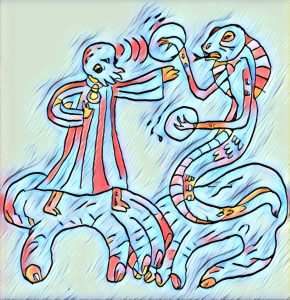 When the keuppia eventually won their freedom, the cephalopodians found themselves preternaturally drawn to these stone shapes, whereas almost all other races were seemingly repelled by the fallen giants. As the keuppia began settling around the titans, they found that instead of dying, the massive creatures had fallen into deep, magical slumber. The keuppia were able to draw the life forces from the giants to found their new cities. They built structures onto the stonelike remains, and into their craftings, engraved powerful words and sigils which both kept the titans slumbering, and also drew power from them. Thus, in only thirty years, the keuppia had built cities or keeps onto and around all twelve of the calcified titans, and had an empire in their own right, fueled by the essence of the colossi.

Where titans fell, their cloak of shadow – sometimes miles wide and long – fell behind them, creating regions of the land there are to this day permanently draped in darkness. Lands of dusk where the sun can never quite penetrate, these areas have grown into fungal forests over the last five centuries, where none but the keuppia dare enter.

nerdgame player with too much time on his hands