There are two human races and four playable non-human races in my current campaign. The dwarves; the summoned race of keuppia (Cephalopodian); the Awakened race of brovchan (brovcha – badgerfolk); and the ancient yuan-ti are all available, as wells as the human races of Tarosian and Khandic.

Dwarves (and a bit on the Fey)

Dwarves, elves, gnomes, & spritken are known, and are all descended from the ancient Aedryn. Only the Dwarves are a playable race. The elves committed mass suicide upon the death of the Great Tree, and a hundred years ago, the Gnomes built great ships and flew to the moon. The very few Elves or Gnomes left are outcasts (of their own choosing), and usually quite insane in some way. The Dwarves are surely losing their sanity as well, but are still digging, digging.

Dwarves were formed from the roots of the Great Tree. They dug deeper and deeper, living in the soil, managing the stuff of the earth.

They constantly want to go deeper. It is a drive within they cannot explain, other than a vague kind of “We need to find our roots,” type answer. Their entire civilization is built about going deeper. Their cities are largely vertical, with the most affluent members of their community living at the bottom, and constantly moving further down in mechanized, mobile drill homes or elevated platform homes. As they encounter beings and entities in the depths of the earth, they politely invite those entities to get out of their way. If refused, they have no problem digging on through, and fighting battles on the way. 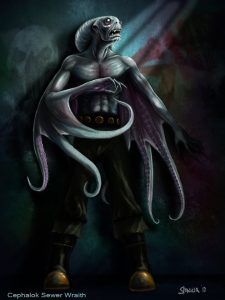 They were forcibly ripped from their homeworld and brought to Ord by the gith as slaves, and when their fell masters were eventually chased away by the aedryn, those keuppia who remained were few and weak. They wandered for scores of years until they ended up in the jungle colonies of the yuan-ti, where as fate and ill luck would have it, they were forced back into slavery around two thousand years ago at the height of the snakelords’ empire. For the next fifteen hundred years, they were forced to help the snakelords expand their kingdom, all while being intentionally stunted by their masters in both mental and population growth. However in secret, the keuppia watched their masters, studying and learning the ways of magic. They toiled and adapted to the world, and learned to combine the Yuan-ti’s strange arcane arts with their own ancient traditions of more ritualistic and eldritch magicks.

Five hundred years ago, the keuppia attempted a ritual that would end their enslavement to the Yuan-ti. The ritual was partially a success – the yuan-ti capital of Szezerith was brought down by the magic – but the arcane backlash created space-time rifts across the land, summoning forth umbral titans – towering above the tallest trees, and some as tall as small mountains – and leading to one of the most terrible times in Ord’s history. These beings brought pure shadow with them, destroying cities with their careless strides, and dragging behind them mile-wide shrouds of dusk. Though only a dozen ever came to Ord, their presence was felt by more than any since the first dwarven earthships broke through Ord’s crust over ten thousand years ago.

Eventually over the course of four years, the might of the combined peoples of Tarosians (humans), brovchan, dwarves, keuppia, and yuan-ti was able to bring the beings down, and where each fell they left a crater beneath them, and a permanent swath of shadow behind them. As the life drained from the fallen bodies, the flesh calcified, creating gargantuan man-shaped and stone-like landscapes. As the war ended, the yuan-ti and Tarosian empires were left in ruins, and the keuppia had bought their freedom at terrible cost.

They found themselves preternaturally drawn to these fallen giant shapes, whereas almost all other races were seemingly repelled by the fallen giants. As the keuppia began settling around the titans, they found that instead of dying, the massive creatures had fallen into deep, magical slumber. The keuppia were able to draw the life forces from the giants to found their new cities. They built structures onto the stonelike remains, and into their craftings, engraved powerful words and sigils which both kept the titans slumbering, and also drew power from them. Thus, in only thirty years, the keuppia had built cities or keeps onto and around all twelve of the calcified titans, and had an empire in their own right, fueled by the essence of the fallen giants.

Keuppian culture is one of shame. Though they were attempting their freedom, the end results (the deaths of countless thousands of people who had not enslaved them) caused them grief. For several hundred years, they hid melancholically in their cities, ashamed of their deeds. Eventually, during a bit of a cultural renaissance two hundred years ago, they began moving out into the world again. Now, though rare, they are seen around the Scathloe Sea. 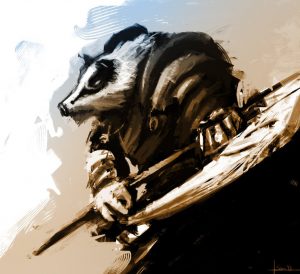 Sentient, human-sized badgerfolk, the Brovchan (Brovcha singular) are a proud warrior race. They began life as an experiment of the Aedryn – a community of Awakened badgers who eventually evolved over thousands of years to become what they are today. When the Aedryn eventually grew bored of these particular experiments, the Brovchan wandered for a while, looking for purpose. For several centuries, they lived amongst humans in the ancient empire of Mel Khan, growing more populous. When the empire collapsed in civil war 1800 years ago, their populations were large enough that they forged out their own small coalition of city-states along the western coast of the Scathloe Sea.

Nowadays, the Brovchan have a strict code of ethics based largely around Honor and Family. 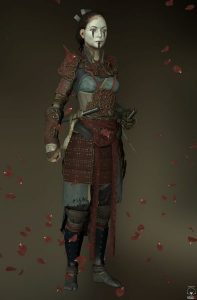 Survivors of the old Mel Khan empire. The original human settlers of the land, having been here since about 2500 years ago. Tend toward animism for religion, focusing on the natural spirit of the world.

Other posts by Brandon